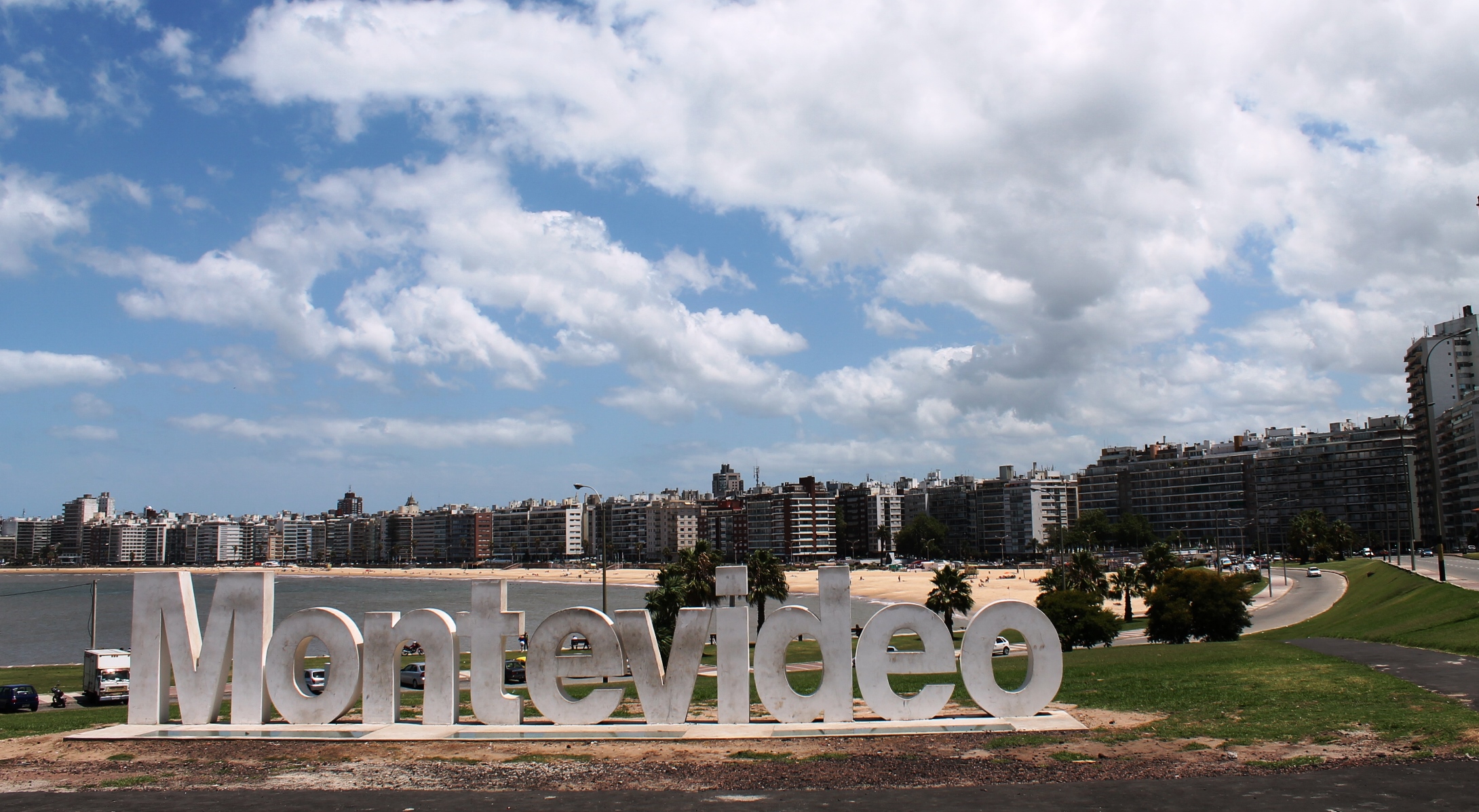 After a late breakfast at Pocitos Hostel I headed for Pocitos Beach.

Pocitos is an upmarket neighbourhood with restaurants, shopping malls, the beach, and lots of apartments where expats in particular reside. I took a walk on 2 of the rumblas (promenades). Very few people were swimming. I understand that people prefer the beaches further up the coast as the Rio de la Plata river (which I crossed the day before to get to Uruguay from Buenos Aires) water tends to get mixed with the Atlantic Ocean waters in Pocitos, leaving an undesirable brown color.

Initially the beach reminded me of Durban (South Africa), but I soon retracted that observation as the only thing in common would be the promenade and flats overlooking the beach.

There are almost no shops or food places on the promenade, and there seems to be no bathing facilities at the beach.

I did find a line of fish shops at the end of one of the rumblas with one restaurant attached to one of the fish shops. It seemed quite busy with a queue of people waiting to enter.

I was hungry but couldn’t wait. I decided to head away from the beach in search of food. About ten minutes later I was glad to see a sign stating Montevideo Shopping which I followed. It turned out to be a shopping mall next to the World Trade Centre.

The first order of business was me to head to the food court. I found an awesome salad bar but then saw the sign stating no debit or credit cards allowed. I had very few pesos left (from the exchange the previous day) and didn’t want to use all of it up. I decided to try the ATM again and thankfully my card worked this time. Quickly I headed back to the salad bar restaurant and got myself a little selection.

The other shops at the mall didn’t interest me and I couldn’t find any magnets so I decided to head back to my accommodation and get some sleep. That night for supper I decided to take a walk near the beach and found Gaga, a nice Armenian restaurant where I got a falafel, tea and homemade biscuits (I believe it’s on Juan Benito Bianco street).

I saw a guy with a horse and cart carriage going through the dumpsters to find anything worth recycling and then placing those items into the cart. I’ve seen beggars and car window washers at the traffic lights in Montevideo, but was surprised to see a flame thrower juggling with three torches. Let’s hope this act doesn’t come to South Africa soon.

My final day in Uruguay. I got up early, had breakfast and checked out by 11am. The owners at the place I was staying were really generous. I could stay and use all facilities except my bed before I depart for the bus terminal. I decided to check out Punta Carreras that day – a large shopping mall only 1km away from where I was staying.

There I found a nice café for lunch – spinach tart, corn tart, a sweet coconut tart and tea. A quick search for a magnet with no luck; so I decided to leave and slowly head back to my accommodation.

A few hours later I headed for the bus terminal on foot with my luggage. I thought that it was only 1.6km away (initial GPS Navigation readings) but it was actually 2.6km – a brisk 45 minute walk, passing by the Obelisk of Montevideo.

At this bus terminal / Tres Cruces shopping mall I was certain that I would find a magnet – and I actually did at a small kiosk cart. My trip to Uruguay was complete!

Check in was quick for my return trip.

Before leaving Montevideo bus terminal I noticed quite a few people walking around with their portable (yerba) mate. It’s quite a thing in Uruguay.

I boarded the bus for Colonia at 6:30 pm and sat beside a Swedish girl who is travelling around South America working at hostels. She told me that the jobs are easy to find on www.workaway.org

Passport control in Colonia before the ferry ride to Buenos Aires was a breeze with the Uruguayan and Argentinian passport controller working side-by-side processing our passports.

I arrived in Buenos Aires by 10pm and took a walk to my accommodation approximately 1.5km away.

Once I checked in it was time for dinner so I headed to a funky looking pizza café for olive and onion pizza (those were the veggies I could recognise on the Spanish menu).