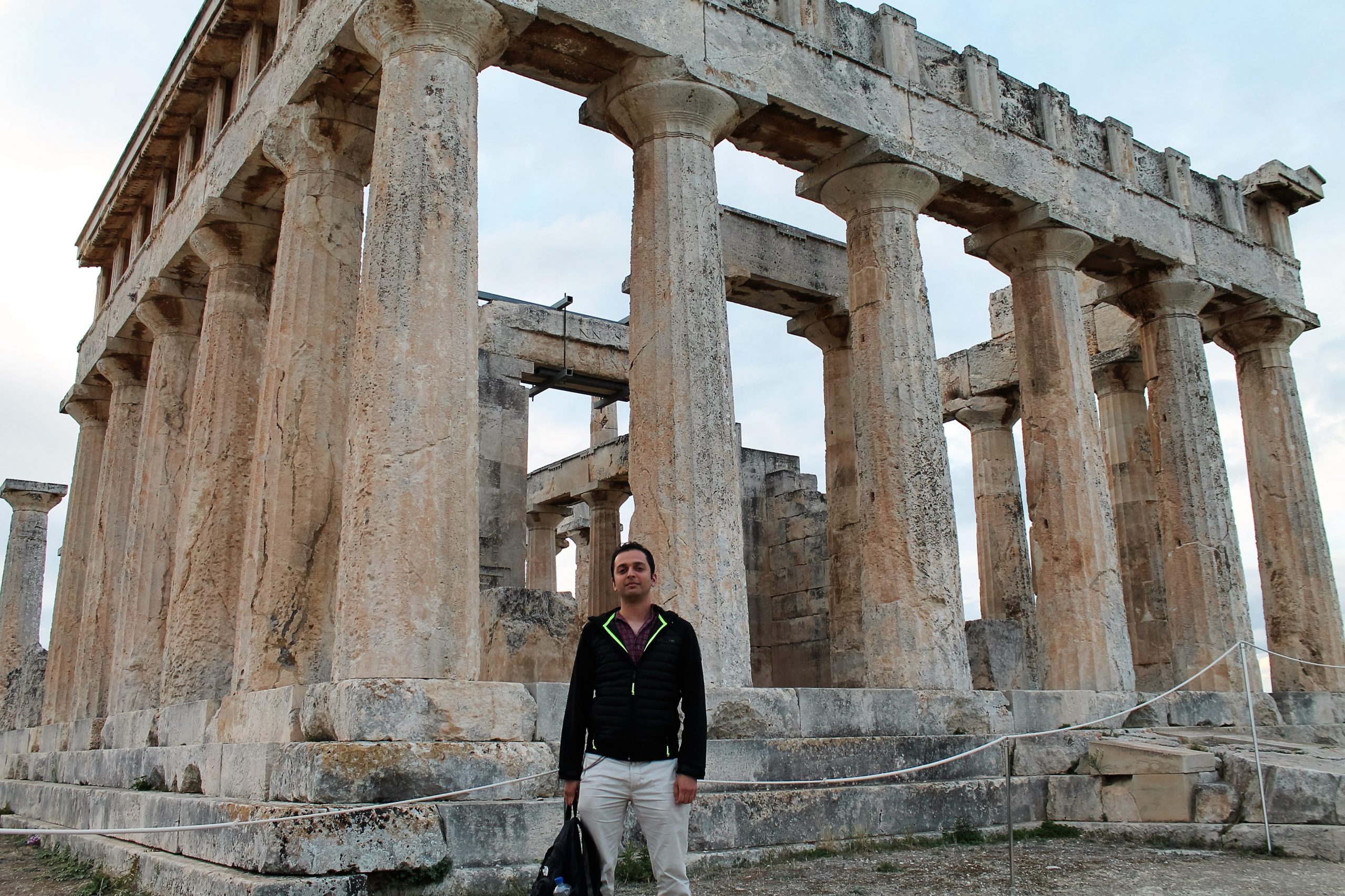 I awoke at 0615am for 7am meetup at the City of Athens InfoPoint (opposite the Temple of Olympian Zeus) for a “One Day Cruise to Argosaronic Gulf” press tour (organised by TBEX).

At 0650am I arrived at Monistaraki train station but my GPS indicated that it would be a 20 minute walk or 20 minutes by train (with a transfer at another station). As I didn’t want to be late I took a taxi and was the first person to arrive at the InfoPoint for this Press Tour.

Once more bloggers arrived we departed by bus at 0730am and arrived at Marina Flisvos port to board the Anna Marou cruise ship at 0800 am.

We were pleasantly welcomed and served coffee.

There was a brief information session as we departed.

We sailed by Aegia island on our way to Hydrae Island. While we waited to arrive at the first island there was a dancing class being held on board. The other passengers on the boat participated. We bloggers just rested and chatted with each other.

As soon as we arrived on Hydrae the bloggers were invited to the Mayor’s office.

He explained to us the history of island, delving into detail on the role Hydrae played in Greece’s independence with the construction of 140 battle ships on the island (from Pine trees).

What’s unique about this island is that no bikes, cars or bicycles are permitted. To get anywhere you either walk or ride a donkey. The cost of homes are high as they require mules to transport the building materials.

Hydrae is the most conserved UNESCO heritage site of its type.

There is no local farming. Some residents leave animals on other nearby islands to graze. The meat of these animals is supposed to be tasty as they drink sea water. I’m not too sure I’m comfortable with this fact but I’m guessing that purer forms of water are available as no mammal can survive entirely on sea water (according to some friends I chatted with).

The Mayor explained the political system if the Island. Families play a big role on an island with approximately 2000 people.

He explained the island’s unique flag, and told us about the Marine Academy on the island, one of Greece’s finest institutions.

Before we left we took pictures with the Mayor.

We also sampled some local sweets.

There was only about 15 minutes left after we met the mayor before the cruise ship departed. I quickly took a stroll through some of the little streets near the dock.

The island has blue and white painted homes that reminded me of Mykonos.

Before boarding the ship I quickly stopped at a local shop to purchase a magnet with the island name.

Hydrae looks like a very interesting and relaxing island and I’d be keen to revisit and spent more time on it.

We then arrived on board the ship for a nice and tasty lunch.

After lunch we visited Poros, the smallest of the three islands for a 1hr visit.

The ship navigated through a beautiful strait before docking at the island port.

I walked along the promenade and passed an architecture museum.

I then turned towards the hill and climbed a few hundred stairs passing by many houses.

From the top of the hill I could see a soccer ground on the other side of the island.

There is a local yacht dock.

Fishing gear on sale and yacht repair facilities, laundromats, pensiones  (B&B’s) and small hotels for those preferring to stay on land.

We then returned on board the ship and set sail for the final island tour.

Late in the afternoon we arrived at Aegina, the largest of the 3 islands that we were visiting today. Some of us were a bit tired at this point as it we were already on this cruise ship for about 8 hours.

There were 2 optional tours to select on this island: A visit to the Temple of Afea and a visit to the Church of Saint Nektarios. We would be visiting both locations by bus.

The Temple of Afea/ Aphea /Aphaia which resided at the top of a 160m tall hill was built around 500BC.

It still looks like it is in good condition, and you get a spectacular view of the island and ocean from the site. We spent about 20 minutes on the site.

Just before boarding the bus I purchased some pistachio ice cream made with goats milk on the island. A very unique flavour indeed!

Aegia is a major exporter of pistachio. We saw many pistachio trees during the bus journey.

On the bus I had a chat with Alex, a blogger who runs Wanderlust Marriage.

We then visited the Church of Saint Nektarios.

The outside of the church is complete but the inside is still under construction.

Saint Nektarios was the last person to be awarded the title of sainthood to this day (Update: Mother Teresa will be canonized as a Saint in 2016).

The bus dropped a few of us on the dock besides the shops, not too far from the cruise ship. By now the sun had already set. I took a short walk on the dock and bought my magnet of the island. Lots of pistachio products were also on sale.

Once the cruise ship sailed away from Aegia we were treated to a live Greek folk show.

Let’s just say that myself and some of the bloggers who were seated at the front were chosen to participate in the show, and I’ve consciously chosen to not share and forget some of the details from that experience (which was a bit humorous). Hey, I’m aloud to keep some secrets from my trip!

We arrived by 8pm at Marina Vlisvos port on the mainland and took the bus back to the City of Athens InfoPoint. From here I walked to Monistaraki square passing by some of the buildings covered in graffiti.

Near the square I met with Nataniel Boyle who runs the Daily Travel Show podcast.

He was also on the cruise ship with me that day and he decided to take the train from the InfoPoint to Monistaraki. It turns out that it takes the same amount of time to walk the distance. I had another brief chat with Nataniel. Apparently we were staying in the same hostel, City Circus Athens.

I wanted to eat a pizza again from Cosa Nostra, the delicious Italian restaurant opposite Athens Style hostel but they were closed. Instead, I decided to purchase a takeaway salty crepe with roasted vegetable and apple ice tea with cinnamon (a very tasty flavour).

After eating my supper at the hostel (City Circus Athens) I headed to my room to pack my bags and get ready for an early departure to Amsterdam the next morning.