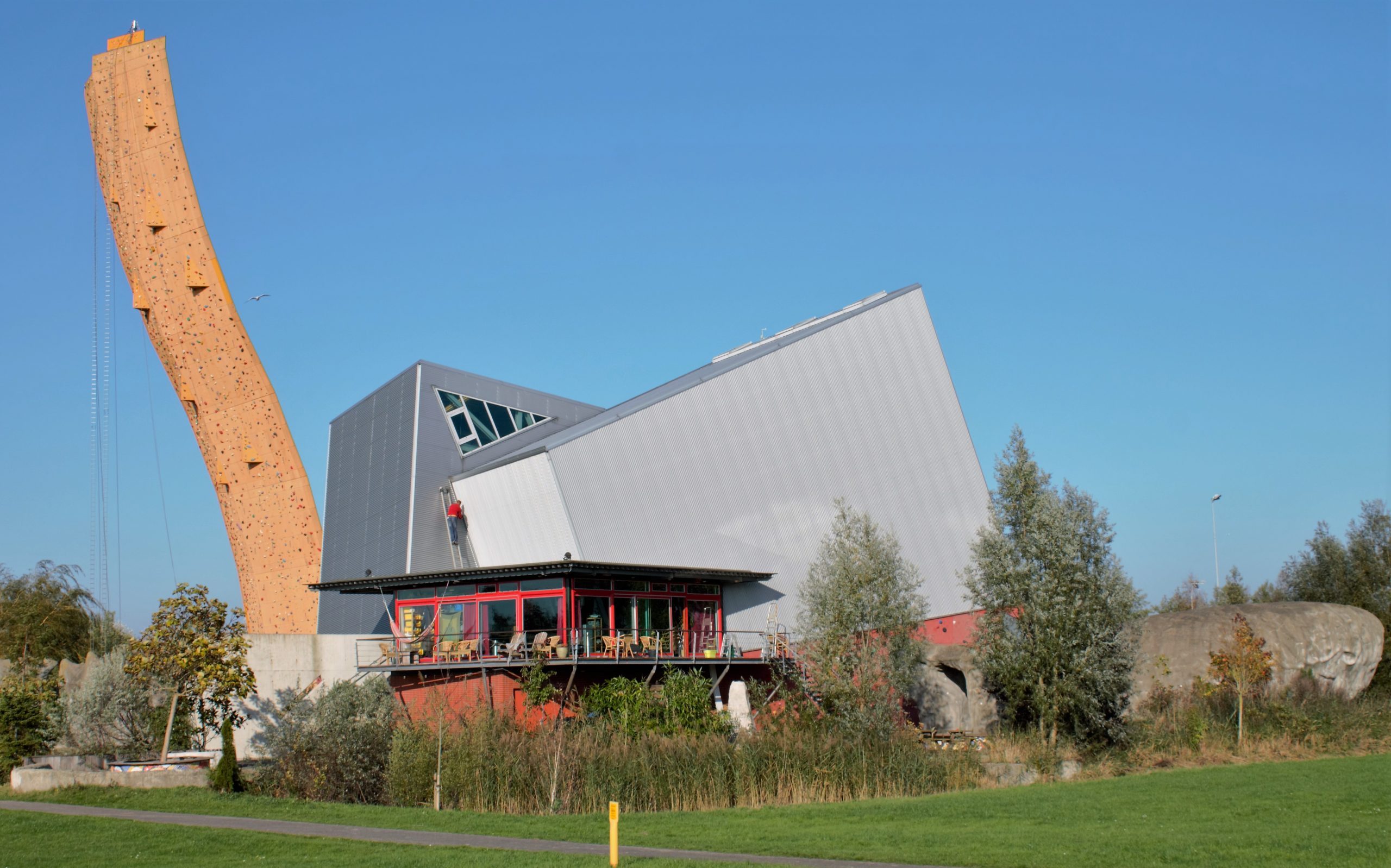 After a day of transit from Athens, I awoke early at Bud Gett Hostel but there didn’t seem to be any special breakfast available. Perhaps because there was hardly anybody staying in the premises at the time I was visiting. I’m not sure if I even saw any other guests.

I had coffee and a muffin at a local coffee shop at 9 am.

I then walked through Herestraat, a pedestrian shopping street and checked out some of the stores until I reached the Grote Markt, a large outdoor shopping square in the city center.

I really liked the vibe and relaxed atmosphere in town, even with cyclists whizzing by everywhere.

I’ve never seen so many cyclists in my life out of any race events.

By 11am I returned to Bud Gett Hostel to check-out from my room and leave my luggage with the receptionist.

I then headed for the bus station to take a bus to the Bjoeks Climbing center. Bus 4 on bus platform J transported me directly to Cardinge where the climbing facility is.

From afar I could see Excalibur, the World’s tallest freestanding sole-purpose climbing wall, standing at 37 meters tall. There are 2 other taller climbing walls in the world but they’re not freestanding or sole-purpose. I’d seen a picture of this climbing wall a year ago and made it my mission to check it out in reality, even though it’s not even listed in popular guidebooks as an attraction worth visiting in the relatively small city of Groningen.

Next to the Bjoeks Climbing Centre with Excalibur is a sports center, walking/running trail beside the lake and a ski center.

I’m pretty sure that I saw hikers with trekking poles walking in the area.

I entered the climbing facility and asked the manager/owner if they had any intro classes or if I would be able to climb with one of the staff members. He said that they had another function scheduled that afternoon.

I should have told him that I was the person that emailed him the day before because later that afternoon while I was on the train to Amsterdam he responded to my email, apologising for not checking his email earlier and stated that he realises I was the person that visited earlier that day, and if he knew he would have tried to arrange something for me.

In any case he allowed me to tour the facility.

There’s a variety of interesting and challenging sport climbing and bouldering routes in the facility.

On Excalibur I was fortunate to watch a team climbing it.

The shape of this climbing wall is fascinating.

After an hour I took a bus back to Herestraat which was near Bud Gett Hostel to collect my luggage and walk to the train station.

I took another route back to the train station just so that I could see a bit more of the town.

I stopped outside the impressive Martini Church to take some photos.

I also paused outside the Groningen Museum which holds one of the five most progressive modern/contemporary art collections in the world. The Groningen Museum is across the road from the central station, on the other side of the canal that surrounds all of Groningen.

There’s quite a bit to do in Groningen (see this wikitravel article) but there’s only so much that one can do with less than 24 hours in a new city.

At the train station I purchased my ticket to Amsterdam Central station, bought a sandwich, a slab of crisp rice white chocolate and juice for the train. That was my lunch.

Just over 2 hours later I arrived in Amsterdam, as the sun was setting.