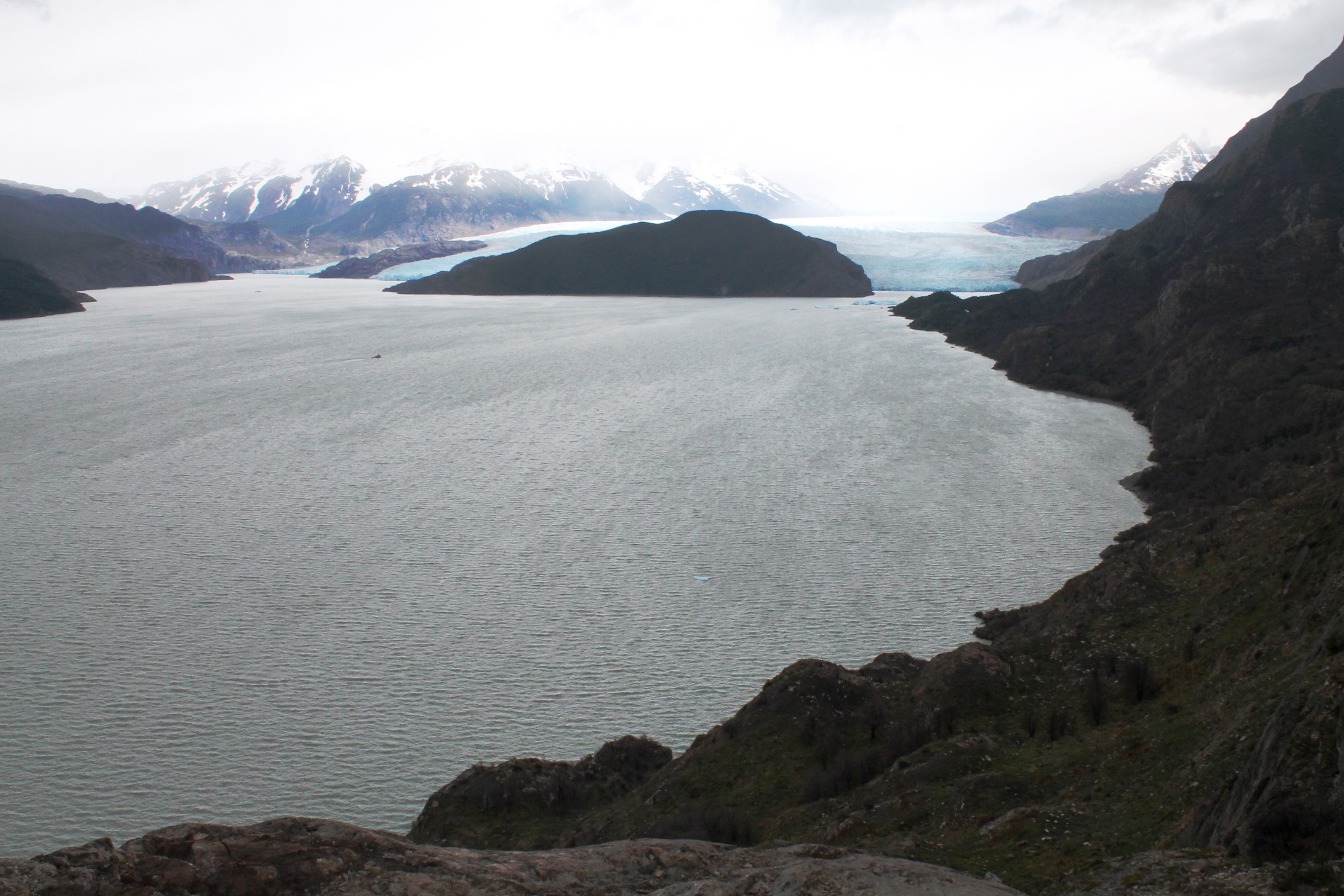 Today I headed out a little late (10am) from Refugio Paine Grande to Refugio Grey as the map indicated that it would only be a 3.5 hour trip. When I was ready to leave plenty of campers were just getting up.

The hike began with me passing through a valley which fared the worst in the forest fire of November 2011. About 30 minutes in the trail started going uphill (for at least an hour). On the way I saw a few hikers who don’t follow the rules and get off the correct trail (which is supposed to be rehabilitated).

I wasn’t feeling to energetic until I upped my water and snack intake. I did eat an apple, yogurt (which I was carrying for three days) and a peanut butter sandwich for breakfast but that wasn’t enough to give me the boost that I needed for the day (and my previous night’s dinner was not too filling). I walked with a ranger for a portion of the trail on the way up to Laguna Los Patos.

What a beautiful lake this was (I was squinting as I was looking towards the sun).

I then continued heading toward Mirador (viewpoint) Glacier Grey, where I was unhappy to see that I had only achieved 4.5 of 11km in 2.5 hours.

I asked someone how long it would take to Refugio Grey and she said “Gosh, maybe 1.5 to 2 hours more”. At least I had achieved the highest point of the trail and only had to descend now with a few ridges to climb along the way. With more photo stops along the way I got to Refugio Paine Grande in another 2.5 hours. The last part was quite a steep descent down a cliff face.

As soon as I checked in at Refugio Grey I headed for the restaurant, asked for a hot cup of tea and a tuna sandwich.

Refugio Grey must be one of the best mountain lodges I’ve visited.

I relaxed for an hour before deciding to get back on the trail to get a closer look at Glacier Grey.

First you pass the campers outside Refugio Grey.

It’s not such a huge glacier but nevertheless it’s a great sight to see. There were also a few icebergs in the lake.

Some of the icebergs are really blue.

Behind Glacier Grey is the southern ice field, the third largest ice field in the world after Antarctica and Greenland.

Kayaking by, and ice trekking on the glacier are offered by a company close to Glacier Grey.

I passed through a beautiful forest to get back to Refugio Grey.

The landscape in the vicinity was also amazingly beautiful.

After showering I went for the restaurant’s USD21 dinner – corn soup, a mashed potato, corn and soya casserole and pudding (blurry image).

Dinner was with a German/Israeli couple (living in Uruguay) and 2 Swiss girls (one who works at an NGO assisting Brazilian street kids). The German mentioned that he stayed there the previous night and met 1 Japanese trail runner who is running the entire O circuit in 3 days (and doing the entire W trek in 1 day). They also sat with 3 more guys who were running the entire circuit in 4 days. I saw the Japanese earlier that day – he runs with his tent and sleeping bag. Some people are amazing! I went to bed early that night as I needed to make an early start the next day

Click here to read more about Day 3 of my trip.

Day 5 of my trip will be posted soon.