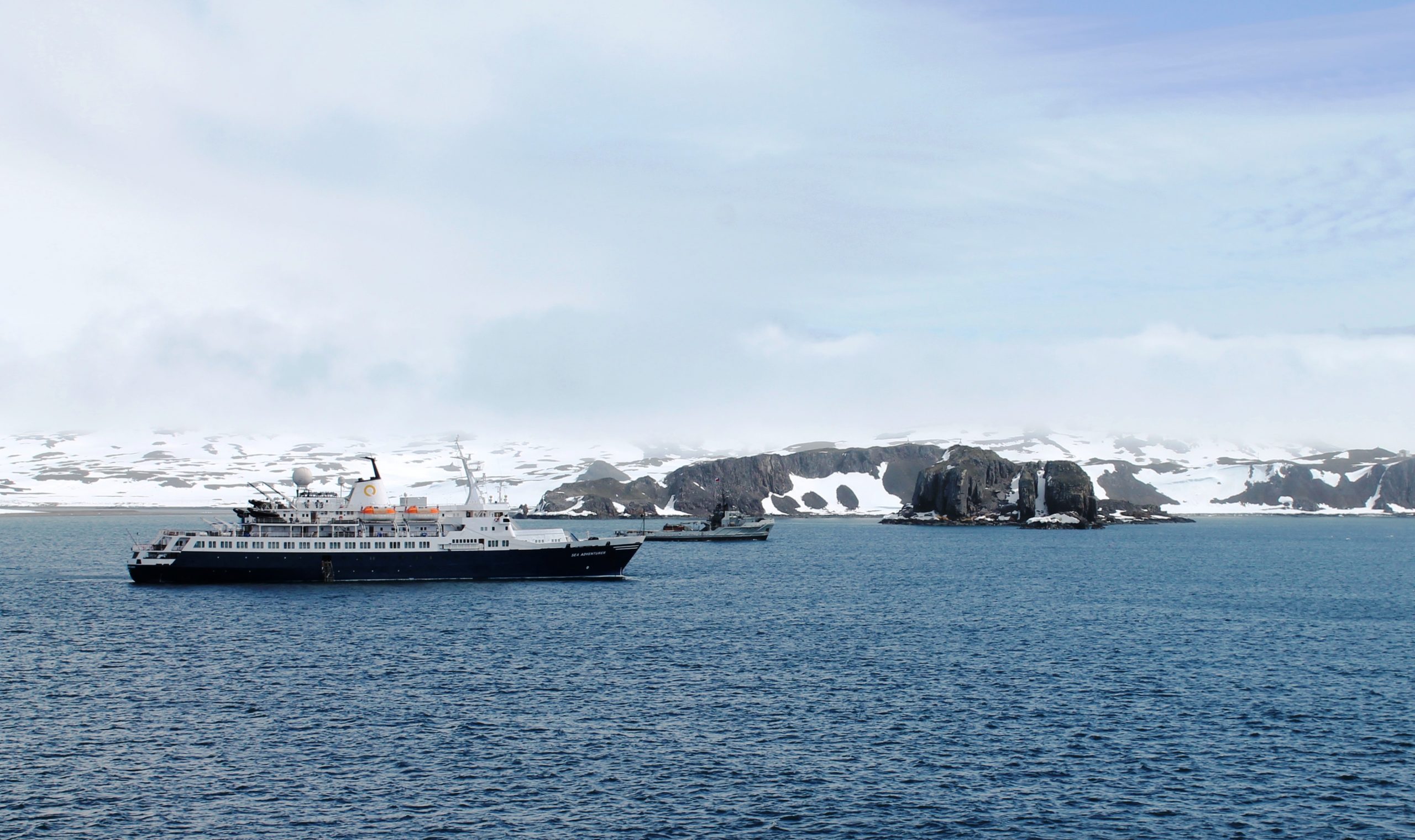 The Wake-Up call was given at 7:45am on the ships PA system and buffet breakfast was served at 8am. Announcements were made for the skiers and climbers to attend a briefing but this did not apply to me as I wasn’t participating in these optional activities.

At 9:30am we all had to participate in mandatory biosecurity procedures. Any used external clothing had to be vacuumed.

Tripods and trekking poles had to be decontaminated.

We had to proceed to the Main Lounge to collect our rubber boots (to wear off the ship) which were being loaned to us for the duration of the trip.

At 11:30am, Carol the on-board Historian gave a very interesting talk on “Finding Antarctica: Early Exploration”.

Lunch was served at 12:30pm in the dining room on deck 3 and the restaurant on deck 4. I headed to deck 4 as 2 of the expedition members were giving a talk on “Expedition Diets: Then and Now”.

Shortly after 1pm the ship arrived at King George Island. We could see a Chilean base on one side and a Russian base on the other. There was one Navy ship present (probably Russian) and another Quark Expedition’s sister ship present – the Sea Explorer. We waited while the crew tried to make arrangements to get the injured crew member on a flight out of King George.

We came on deck later as we saw 2 zodiacs from the Ocean Diamond depart towards the Sea Adventurer. The Sea Adventurer offers a Fly & Cruise option where passengers can fly into King George (thus skip the Drake Passage crossing) and then cruise the South Shetland Islands and the Antarctic Peninsula. The injured crew member was being transferred to the Sea Adventurer where that ship doctor would also examine him. Then, the Sea Adventurer would facilitate his transfer to a plane later that day when passengers for that cruise would fly in. While we were watching the zodiac transfer a Skua flew onto one of the kayak’s on deck which which caught our attention.

I had to attend a mandatory briefing on camping in Antarctica after lunch as that was one of the optional excursions that I decided to go on.

That afternoon we spotted some humpback whales around the ship.

At the expedition briefing before dinner that night Shane the Expedition leader told us that we are now on Plan B and advised us what we can expect over the next few days. At the moment we were on our way to Enterprise Island.

I headed to bed early as I had some sleep to catch up on. At 11:30pm my roommate came in and told me that I have to come above deck for the New Years’s countdown. I fell back into my snooze when an announcement was made on the ship’s PA system at 11:45pm advising quests to go up. I finally decided to get up, dressed nice and warm and got onto the open deck by 11:55pm.

We had a “cool” New Year’s countdown.

There was also a small midnight buffet in the Club Room afterwards.

I traveled to Antarctica on the Ocean Diamond with Quark Expeditions from 29 December 2013 – 7 January 2014 and booked my trip with Sarah at Freestyle Adventure Travel – whom I highly recommend!